FAQs from Family and Friends

When I was at home for Christmas, my friends and family were very interested in learning how I have enjoyed my experiences both teaching and living in London so far. Although there have definitely been difficult moments, both in and out of the classroom I have learned a lot and have definitely benefited from being here. For those of you that I wasn’t able to see during the break, and for the rest of you who are simply interested, I complied a list of answers to the Frequently Asked Questions that I received over the break:

Is living in London expensive?

Yes. Yes. Yes. Have I saved anything? Absolutely not. Will I save anything? Probably not. However, I make enough to be able to travel on my breaks, chip away at my student loan, and live semi-comfortably in London. I came here to learn and explore, so I am not really concerned about saving- just as long as I don’t go into more debt than I started with, I am happy.

Truthfully, I don’t find living in London much more expensive than it was to live in Toronto (where I spent a year while completing my B.Ed. at U of T). The reality is, big cities are expensive, but they also have a lot to offer that smaller cities or towns do not: vibrant multicultural communities, a lively scene of art, culture, and entertainment, an opportunity to participate in anything and everything, and the constant buzz of excitement and struggle- the exhausting rush of so many people trying to “make it in the big city”. 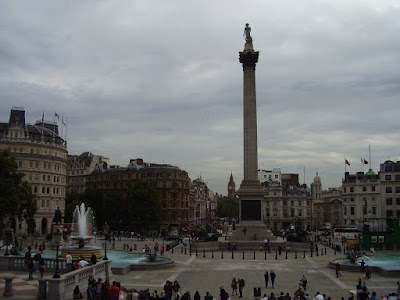 Since there are so many shops, pubs, shows, and things to see and do, it is easy to spend an entire paycheck before you get the next one. However, you can actually live pretty cheaply here if you try: it is all dependent on what you value and how you want to spend your money. If you eat out all of the time, never pack your lunches, buy lots of drinks at the pubs, and go shopping a lot, you will have difficulty even surviving in London. But if you take the time to live a little more frugally, you will be fine. It just takes a while to figure out how.

For example, I had initially been spending a lot more than I needed to on transportation. I had been using a “pay as you go” Oyster Card for the tube and paying regular fare for trains. Even though it is cheaper to use an Oyster Card than it is to pay normal tube fares, it added up. Payment for the London Transportation System is based on how many “zones” (1-9) that you travel through. It is often faster to travel to the suburbs via train, but it is also more expensive. However, what I didn’t initially realize is that you can purchase “Travel Cards” that give you unlimited travel on the London Underground (tube), National Rail (train), and buses between certain zones.

When I was supply teaching, I had difficulty anticipating my travel costs because I never knew where I would be travelling to. Usually, the schools I worked at were in Zones 1-3, but on a few occasions, I also worked at schools in Zones 4 and 5. Since I was normally called in less than an hour before school started, I needed to get to the school as fast as I possible could. This meant taking the train. The costs definitely added up.

Now that I have the transportation system all figured out, have a permanent job at the same school every day, and have developed more of a consistent routine, I use a Zone 1-2 Travel Card which costs £25.80/week, or £99.10/month. In the spring, I might just start riding my bike to work (it is about a 30 min bike ride), which would save me quite a bit of money.

When you were supply teaching, did you get lost trying to find the schools?

I never got lost once on my way to work. Travelling in London is pretty straightforward once you understand how to read the Tube map. Directions and names of stops are all clearly indicated in the stations; all you have to do is make sure that you take the time to stop and read them. My agency was really good about providing me with clear directions from my residence. They would usually text me the specific directions as I was in transit so that I would not waste time figuring out how to get to where I was going. I also always brought a London “A-Z” map with me, so if I was ever unsure of my location, I would just look up surrounding street names to orient myself.

Have you done much travelling? 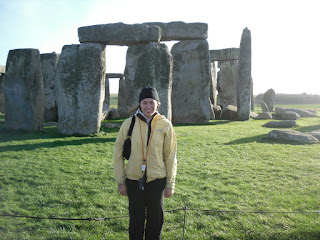 I have not done as much travelling as I had hoped, but have some exciting trips lined up for the rest of the year: weekend in Belgium, skiing in the Alps, rugby tour to Ireland, travelling through Spain and Portugal, cycling in Italy...and, hopefully, more to be scheduled. For the first part of the year, I was focused more on setting up my life in London than I was in leaving the city. The highlights, however, were definitely my trip to Dublin over the October half-term, and to Paris on my birthday weekend. I have explored England a little bit, as I have been to Bristol (where my good friend, Angela, goes to University), Bath (to see the “Roman Baths”), Salisbury (to see Stonehenge), Brighton, and have cycled through much of Kent.

Are the students badly behaved?

I have been in some classes which have been absolute nightmares, but have also been in some really nice classes. There have been moments where I have done everything in my power not to cry and have been moments when I have really had fun with my job. The worst experience I had was when a student told me to “shut the #$&%# up”, refused to leave the class when I told him to get out, and then hid under a desk and started chucking paper balls at the rest of the students. Although this was a horrible experience for me, I found the time when a girl took a hair straightener out of her purse, plugged it in and started straightening her hair in the middle of gym class much more disappointing.

I find the hard part about managing students here compared to back home, is that you are completely on your own. I haven’t been in any schools that have intercoms or “P.A.” systems. Therefore, if students get into a fist fight in class (which has happened at least 3 times so far), it is hard for me to contact other authorities. All you can really do is send a student to get “someone”, usually their “Head of Year”. It has definitely been hard and frustrating at times, but I am hoping that dealing with such crazy classes now will make future teaching experiences much easier.

The weather in September and October was pretty comparable to how it is in Canada during those months. In November and December, it rained A LOT, but it wasn’t that cold. It felt like late October in Canada. The temperatures in January are normally above zero, but this past week, it snowed! It is rare for London to get any snow, but we got about 10 cm. The city was in a complete panic! It was really interesting to see the chaos that was created over such a small amount of snow, but understandable considering that there are not the systems in place here to effectively deal with snow removal and people are not used to driving and walking in snowy conditions. I literally saw people walking sideways on the sidewalks because they didn’t know how to walk across the ice! Many schools closed, but mine remained open. However, only about half the students were there (even though they all walk to school…those slippery sidewalks!). The snowball fight at lunch was a full-out, school-wide war! Although it was complete craziness in the school yard, it was cute to see the students having so much fun in the snow, and makes me realize how much we take our seasons for granted in Canada.

Do people make fun of your accent?

Yes. They notice my “American” accent right away, and the students particularly, get a kick out of some of the terms and expressions I use (see my British/Canadian dictionary), but I think they actually like learning the differences in our vocabulary.

Can I come and visit?

Have other questions? Don’t hesitate to contact me or leave a comment.
Posted by Shannon Mullen at 10:32 PM

Love reading your insighful little posts. Thanks for sharing :)

This is a great post! Well done! Can I copy & paste on the CC blog and send more readers your way? I know my readers will love to read this.

Please let me know (via email).
Thanks! Keep up the great work.
Victoria