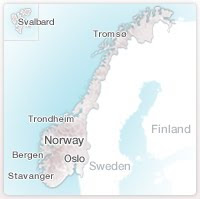 A few weeks ago, I went to Oslo, Norway, with my friend, Mel, an Australian who I met on my ski trip in France. It was a jam-packed weekend, as we tried to squeeze all of the sights into two days, but definitely worth it. 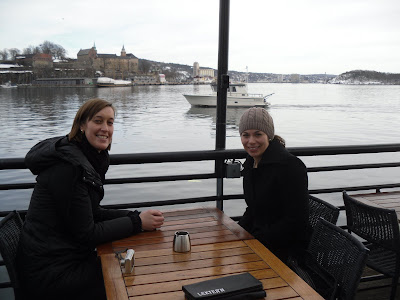 Our decision to go to Oslo was a little spontaneous. I was having an incredibly rough day at work (but now can’t remember what even happened, so it mustn’t have been that bad!), and started browsing the Ryan Air website to get myself excited about my next adventure. The wonderful thing about teaching in London is that your next holiday is always less than 6 weeks away, so whenever you have a bad day, you can always start dreaming about your upcoming vacation. While I was searching for flight prices for weekends I had off rugby, I came across a flight deal to Oslo: 5 pounds each way! What a bargain. This would be a cheap weekend getaway, I had thought. How wrong I was! Oslo is ridiculously expensive. I still feel sick at how much money I spent in a single weekend. Oh well, when in Oslo…This experience taught me that a cheap flight does not equal a cheap trip and I will be a little more cautious as to where I go for budget vacations. In hindsight, however, I am not upset I spent so much money in Oslo, as I did enjoy my time there and learned a lot about Norwegian history and culture.

As a result of my confusion in converting currency, I did not initially realize how expensive Oslo was, especially for food. Norway’s currency is the Norwegian krone (NOK). One British Pound is approximately 9 NOK (and 1 Canadian dollar is just less than 6 NOK), which is a little disorienting when trying to figure out the value of items. Mel and I were being pretty frugal in where we ate, but what is usually considered cheap food in London ended up being quite pricey. For example, we ate at Burger King, which I paid for on my credit card. I was shocked when I looked at my statement. A simple burger, drink, and fries combo ended up costing 13 pounds, which converts to over 20 dollars Canadian. Yikes…and this was a cheaper meal! It was also funny when I withdrew 200 NOK from an ATM thinking that it was alot of money, when it was really less than 25 pounds. This being said, I felt foolishly rich when I had 500 NOK in my possession (less than 60 pounds).

We arrived in Oslo late Friday night, checked into our hostel and went on a wander around the city. My first impressions of Oslo were really good: it seemed lively and cosmopolitan and the people were really friendly. Also, as it was the first place I have been to where I did not understand the first language (Norwegian), I was a little taken aback by the fact that many signs were meaningless to me. Everything was written in Norwegian (although most signs, menus, and brochures are also written in English)! Luckily, most people spoke English fluently so we did not have much difficulty communicating.

On Saturday, we ate what I now realize was a very overpriced breakfast at the hostel and went for a walk around the city. Our first stop was the tourist information center, where we bought a 48-hour tourist pass, which granted entry to most of the major attractions and allowed for unlimited access on public transport. I would highly recommend the tourist pass to anyone planning on visiting Oslo in the future. It is definitely good value for what it offers and forces you to see as much as you can. The public transport system is also efficient and user-friendly and we ended up using it a lot. 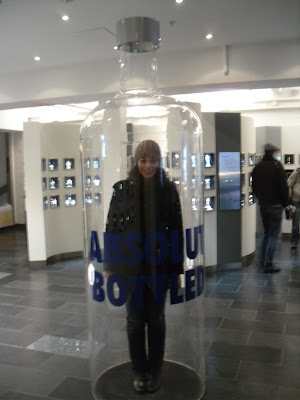 On Saturday morning, we visited the Norway Opera House (which Mel was not too impressed by since it apparently did not compare to the Sydney Opera House), and walked around the medieval Akershus Castle. We later stumbled across “The Mini Bottle Gallery” en route to the Nobel Peace Center. This bizarrely delightful gallery is basically a collection of over 50 000 mini bottles and ended up being the highlight of the trip. I thought that it was quite funny (and reflective of today’s youth-haha) that we spent so much time in what could be considered a silly, meaningless exhibit during the time we had intended to spend in a very serious and meaningful one.

When we were finally able to pull ourselves away from the mini bottles, we went to the Nobel Peace Center, as planned, and it was incredible. There was a very moving exhibit, “From King to Obama” which portrayed how the work of 1964 Nobel Peace Prize winner, Martin Luther King, Jr., in the American Civil rights movement helped create an opportunity for Barrack Obama, this year’s Nobel Peace Prize winner, to become President of the United States. 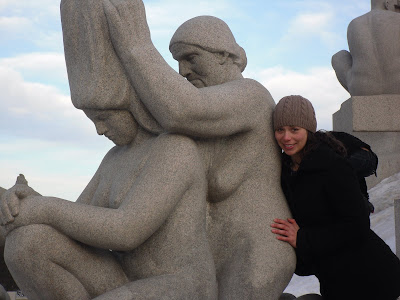 In the afternoon, we had a late lunch at the waterfront and enjoyed the view of the harbor. Afterwards, we walked through the Vigelandsparken Sculpture Park, which contains walkways lined with 192 bronze and granite statues of naked and obviously passionate lovers, naked screaming babies, naked affectionate elderly people, and most centrally displayed, a 14-meter phallic-like column consisting of 121 entwined naked human figures. All the sculptures were carved by Norwegian sculptor Gustav Vigeland (1869-1943) and I would have liked to know what his intentions were when he created the park because I simply didn’t get it.

On Sunday, we took the subway and a bus to Holmenkollen Ski Park, where we saw the newly rebuilt ski jump and visited the ski museum. There was actually a biathlon competition going on that day, so it was neat to see all of the fans dressed up in their country’s colours and waving flags to support their athletes. Later on, we went to the Bygdoy peninsula, which is located just outside the city center, and visited the Viking Ship Museum and the Norsk Folkemuseum. The Viking Ship Museum is really impressive, as it showcases three 9th century Viking ships which are in surprisingly good condition. By the time we got to the Norsk Folkemuseum, I was feeling pretty exhausted from all the sight-seeing so did not really appreciate it as much as I could have. 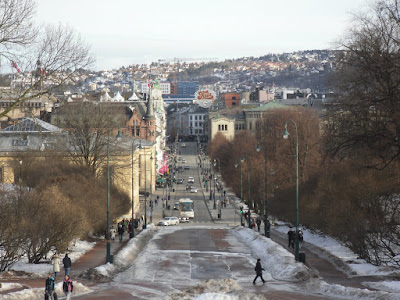 The aspect of Oslo that I loved the most was its proximity to the wilderness. In fact, this made me a little homesick, as it reminded me of all of the outdoor activities that I participate in regularly in Canada. Although London has many beautiful parks to run and cycle in, I often crave the beauty of the great outdoors.

Oslo is in an amazing location. It lies at the tip of a fjord and is surrounded by forests and mountains. It was common to see people with their skis on the subway, as the public transportation system in Oslo connects people with a few ski hills and an extensive network of cross-country ski trails. It was too bad that we were only there for a weekend because we did not have time to both ski and see the sights. While we were there, I made a tentative plan to go back the following weekend to do some cross-country skiing…unfortunately, the one weekend ended up being too expensive to justify a second trip. I really would love to go back to Norway in the summer and venture north to do some camping and hiking. 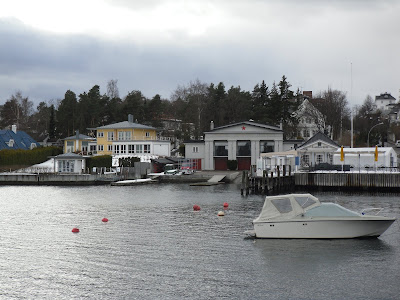 Despite the fact that my weekend in Oslo did major damage to my bank account and made me a little homesick, I absolutely loved it. I could really see myself living in a place like Oslo forever, as I appreciated the culture, the arts, and the opportunities it offered for healthy, active living. I guess it is a good thing that I enjoyed it so much, because it reminded me a lot of Canada! Hopefully, I’ll be able to go back at some point to take advantage of the outdoor activities…but next time I go for a weekend, I’ll budget for a week!