I have realized that one of the great things about living in London is that so many friends and family members from back home are keen to take advantage of the opportunity to visit this great city (and me, of course!). I am very lucky to have already had one visitor: my brother, Pat. He stayed for just over two weeks, arriving on October 28th and departing on November 11th. Since he timed his trip to coincide with my half-term break (The school year in England is organized a little bit differently than it is at home. It goes until the middle of July, so there is a shorter summer and more breaks throughout the year.), we were able to do a bit of travelling together.

When he arrived, we spent a day in London, so that I could give him a jam-packed overview of the amazing city that I now call home. We then spent four days in Dublin with two other Canadian teachers I had met in my residence. While there, we went to the Dublin Castle, Guinness Brewery, went to Glendalough (a 6th century monastery, the Wicklow Mountains, and felt obligated to experience as many pubs as possible, as this is such an important element of Irish culture. The highlight of the trip was spending a day with my friend, Kayla, a Canadian who I met while working in Banff who is now living in Ireland. Since she is a really close friend of mine, it was incredible to reconnect with her somewhere neither of us would have ever expected to be. Despite how outrageously expensive it was (many items cost twice as much as they do in London), we had a really fun trip- I definitely could live in Dublin for the rest of my life. I’ll go into more specific detail of my perceptions of Dublin and Irish culture in subsequent posts. 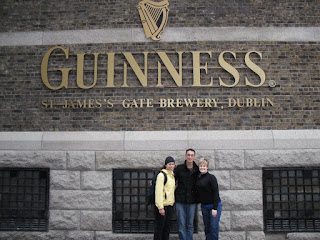 The next week, Pat explored London while I worked, and he visited numerous museums, the Tower of London, Westminster Abbey, Big Ben, and other popular attractions. I met up with him after work to experience more sights at night. It was great because I was able to discover many new places and activities. 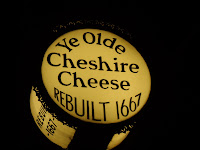 We went to “Ye Olde Cheshire Cheese”, an old pub on Fleet Street, which was shortly rebuilt after London’s “Great Fire” in 1666. Its gloomy cellars, narrow alleys, and low ceilings make you feel like you were in a Dickens novel. This is probably because the pub is actually featured in “A Tale of Two Cities” and was frequented often by Dickens himself, as well as other prominent figures such as Samuel Johnson, Oliver Goldsmith, Mark Twain, Alfred Tennyson, and Sir Arthur Conan Doyle. At the pub, Pat and I enjoyed a pint of beer and shared an order of “Spotted Dick”, a traditional English dessert, which is basically bread pudding with dried fruit and custard. 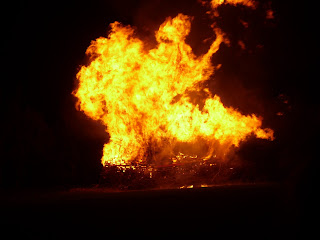 During this week in London, Pat and I also went to see the musical “Billy Elliot”, went on a tour of the Globe Theatre, and went to a Guy Fawkes Night bonfire. Guy Fawkes Night is an annual celebration in England on the 5th of November which marks Guy Fawkes’ failed attempt to blow up London’s Houses of Parliament in 1605. The night involved a bonfire which burned a life-sized dummy of Guy Fawkes, an impressive fireworks show, carnival games, and the consumption of cotton candy and mulled wine. We were lucky to have taken part in this very “British” event.

Since Pat was visiting, I took Friday off and we went to Brighton for the day. About an hour’s train ride away on the South Coast of England, Brighton, is a former fishing town and is characterized by its rocky beaches. While there, we walked on the beach and on the pier, shucked some oysters and ate the best fish and chips of our life. It was nice to get out of the city for a day and breathe in the fresh ocean air. 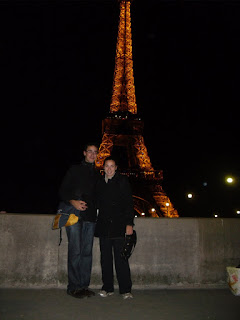 On Saturday morning, we took the Eurostar to Paris, where we spent the next three days. We arrived in Paris at about 9:30am, with no real plan but were both very excited. It was funny, because we had a moment of “ok, uh…so we are in Paris…what do we do now??” We solved the problem by getting a map, finding our hotel (which was an absolute dive), and wandered aimlessly through the city. We were immediately surprised to discover that the cliché of Parisians strolling through the streets with a baguette in one hand and a cigarette in another is actually true. However, we were quite happy to participate in the baguette-eating ritual. While in Paris, we went to Sacre Coeur, Notre Dame Cathedral, Le Palais de Versailles, L’Arc de Triomphe, the Louvre, and of, course, the Eiffel Tower. Although it was amazing to finally experience Paris, we were both turned off by how dirty it was and how aggressively beggars approached you for money. Please see later posts for more specifics on Paris.

All in all, it was so wonderful to spend two weeks with my brother, Pat. Even though I am enjoying and benefiting greatly from the experience of living in another country, it is hard to spend so much time away from all the people I care about back home. It was nice to have a little bit of home come over here (I especially appreciated the 2kg jar of Kraft Peanut Butter that Pat brought over for me). This being said, if you are considering doing any traveling this year, please don’t hesitate to visit. I would love to have you! Thanks again, Pat, for such a fantastic trip. I am still baffled by how you put up with me for over two weeks and how well we got along!
Posted by Shannon Mullen at 8:56 PM

No, thank you! Please take me with you when you go back after the holidays!