Celebrating my 25th Birthday with the Mona Lisa

On my 25th birthday, I went to the Louvre and saw one of the world’s most popular paintings. (No big deal- I took a Monday off so my brother Pat and I zipped to Paris on the Eurostar for a long weekend). Maybe it was symptomatic of some existential quarter-life crisis, but to me, seeing the Mona Lisa was a huge disappointment. To be honest, if it wasn’t so famous, I would probably have just walked by the Mona Lisa without noticing anything special.

On this visit, however, like most other tourists at the Louvre, I did not walk by the famous painting. Instead, other fantastic paintings were granted a mere glance while Pat and I bee-lined to the renowned exhibit. Once there, I aggressively used my rugby skills to push through the crowd so that I could take pictures of myself with the Mona Lisa in the background. This frantic, almost hostile behavior shows that subconsciously, I was less interested in seeing the Mona Lisa than being seen with it; proof of my “worldliness”; being able to say: “I have been to Paris and have seen the Mona Lisa”. 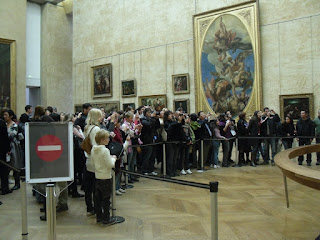 After I had finished taking my pictures (see below for how wonderfully they turned out), slightly embarrassed by how tacky I was being, I tried (as pretentiously as possibly) to appreciate the fact that I was standing in front of the most famous painting in the world. However, the physical set-up for viewing the painting makes it difficult to get into an artistic mood. First of all, you are constantly battling other tourists for a peep-hole of viewing space while standing behind a rope, which is at least 30 feet back from the painting. Since the dimensions of the painting are only 30” by 21”, and it is encased in bullet proof class, it is impossible to take in much detail. In hindsight, I should have looked at the painting through the zoom on my camera.

Perhaps my expectations for the iconic painting had been too high, as I had anticipated a magical, life-changing experience. I had presumed that seeing one of the most famous pieces of art in the world would have had at least some effect on me. I am no art connoisseur, but feel that the purpose of great art is to expand the mind of its audience. I hate to admit it, but my vision of the world has not been altered by seeing the Mona Lisa. In fact, all I felt was confusion: who and what determines great art? Is anyone nowadays actually impressed by the Mona Lisa, or do we simply pretend to be wowed by it because we are told that we should be?

Apparently visitors spend an average of 15 seconds viewing the Mona Lisa, which after factoring in photo-taking time, doesn’t really allow for meaningful reflection. I am really interested in knowing what people are thinking about while viewing the painting, and if the experience leaves any sort of lasting impression on anyone.

After a trip to Paris, one of my professors at Queen’s went on a rant during a lecture because he was still disgusted with his friend who had ruined his recent experience of seeing the Mona Lisa. During what my prof had built up to be an epic moment in his life, his friend leaned over and whispered that he was really craving a cheeseburger and wondered if there was a McDonald’s nearby. I really want to know what my prof expected his friend to be thinking about, or what he himself had been thinking about during this time! Perhaps his friend’s hunger actually saved my prof, for now, he will forever blame his disappointing experience with the Mona Lisa on his artistically ignorant friend and can preserve his grandiose image of the famous painting.

Painted by Leonardo da Vinci in the early 1500s, the Mona Lisa is thought to be a portrait of Lisa Gherardini, the wife of Italian silk merchant, Francesco del Giocondo. Apparently, the painting was commissioned for their new home and to celebrate the birth of their second son. The title, “Mona Lisa”, comes from the Italian word “ma donna”, often shortened to mona, which means “my lady”.

What has drawn critics to the painting is Lisa’s “enigmatic smile”. However, it is not the smile itself that has attracted so much attention; it is the idea behind the smile. I guess it was not common for women of this time to be captured as relaxed. Prior to the Mona Lisa, women had been depicted as stiff and angelic in portraits. Mona Lisa’s mysterious smile caused people to speculate as to what was behind the smile: rebelliousness, complexity, and above all, personality. She represented the idea that women could be more than a portrait of a porcelain doll; that shockingly, women could be interesting. Therefore, the painting changed the way that women are allowed to be represented in art, which is likely how it gained so much momentum.

I think that it is a good thing that people of my generation are dreaming of cheeseburgers instead of being wowed by Mona Lisa’s mystifying gaze. It is a sign that we have progressed: we are not interested in a painting of a woman who seems interesting, because we accept that women are interesting. I suppose that I did, in fact gain something from seeing the Mona Lisa, as it also made me feel lucky that I turned 25 at a time when I am allowed more than a smile. I have the freedom and independence to celebrate my birthday with a glass of wine, a baguette, and some Brie à Paris!
Posted by Shannon Mullen at 10:51 PM

Hehe, sounds like Mona Lisa did leave an impression on you... just not an inspiration as you hoped, perhaps? :)

Glad to see some 'positive spin' skills! You should add the pictures I took of the security barriers. At least the Venus de Milo lived up to the hype...

I totally know what you mean Shannon-the Mona Lisa didn't really leave much of an impression at first....but I actually found the longer I looked at it, the more it got me. I was lucky that I basically had the room to myself at the time though. I think the most interesting part of it was trying to decide if she was really happy or not. Glad you are having a great time!!!!

I recently came accross your blog and have been reading along. I thought I would leave my first comment. I dont know what to say except that I have enjoyed reading. Nice blog. I will keep visiting this blog very often.

Your blog keeps getting better and better! Your older articles are not as good as newer ones you have a lot more creativity and originality now keep it up!

have you been to the national gallery yet? van gogh's Sunflowers made a huge impression on me, probably the same impression you were hoping that the Mona Lisa would leave on you. it was really amazing to see in person. i'm just waiting for the day when i see Starry Night!! i have goosebumps just thinking about it!

Thanks for the recommendation to go to the National Gallery! I will certainly make a point to go there soon. It is funny how I have rushed to see all of the "touristy" things in other cities but have not yet covered all of London's most famous sites.

Amiable post and this enter helped me alot in my college assignement. Say thank you you for your information.