"For decades I tried to figure out why Paris is shrouded in such mystique. Granted, walks at night along the Seine are enchanting, but that alone cannot explain why the very mention of Paris had always conjured up tales of romance, well before it was blessed with gas or electricity, well before its exquisitely lit street-corners were replicated the world over in black-and-white print. After all, medieval Paris was a dark den of filth, reeking with nauseous stench, and the two sinister prison fortresses that jutted out of its skyline could hardly have been conducive to romance. Not to mention the 32 rotting corpses dangling in the offing when the royal gallows was used to full capacity. Yet the myth has been perpetuated for a good thousand years.

I racked my brains, I dug into the past, I travelled into my own psyche looking for an answer, but I came back empty-handed. There simply is no answer. There lies the beauty of the enigma. Paris is poetry, Paris is mystery, Paris is beauty-an exasperating decoy that never quite delivers, all the more compelling for its imperfection, the archetypal reservoir of all our passions...."
(Thirza Vallois- Romantic Paris) 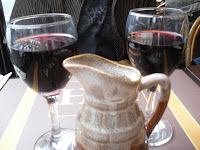 Perhaps it was because I was sharing a bed in a budget hotel with my brother, but during my three days there, I could not figure out why Paris is considered to be the most romantic city in the world. I accept that the wine, the delicious pastries, the opera, the history of great art and literature, gothic architecture, and even the French language give the city an artisan feel, but it is not an effect I would describe as romantic. I guess that for me, romance is simply enjoying time with someone you love, something that occurs regardless of location. Paris, in my opinion, is powerless over love or relationships. It is the people, not the city, that create romance. 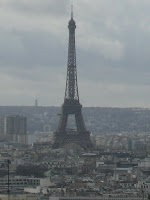 My criticism of Paris’ romantic image begins with the Eiffel Tower, one of the most prominent symbols of romance in the popular culture. If you take the time to stop and think about it, the cold, iron-lattice structure is not at all romantic. In fact, it was considered an eyesore when it was first built, and the city of Paris had initially planned to tear it down once its 20 year permit ran out. Apparently, French novelist Guy de Maupassant, detested the tower’s appearance so much that he ate lunch in the Eiffel Tower’s restaurant daily, as he felt that it was the only place in Paris where he could avoid looking at it.

My preconceived dreamy image of Paris was further shattered when I realized how dirty the city is, especially compared to London, where the streets are constantly swept and public areas are cleaned. I was also shocked by the number of homeless people who aggressively approached anyone who looked like a tourist. On several occasions, sad yet beautiful young Eastern European-looking girls who wore tattered dresses and scarves on their heads tapped me on the shoulder asking if I spoke English. After I would nod naively, thinking they might need help with directions or something, they would hand me a note saying they were refugees who had been orphaned and needed money. For me, the presence of so many homeless people made the obvious display of the city’s wealth through its elaborate architecture a little nauseating.

I was particularly disgusted with the Palace of Versailles, located 20 km south-west of Paris, which was France’s political epicenter from 1682 and home to Louis XIV, XV and, XVI, and Marie Antoinette. The palace housed the royal family until October, 1789 when the French Revolution forced them to return to Paris. Elaborately decorated with classical French paintings, sculpture, and lavishly covered in gold, the palace is an artistic masterpiece. It successfully showcases the French monarchy’s wealth and power during its reign. Constructed as a symbol of royal absolutism, the palace is also a reminder of political oppression. It is no wonder that the people of France revolted against the monarchy—they were dying of starvation and malnutrition while their rulers lived in a castle made of gold. Think of how much more could have been done with the money spent on gold paneling and crystal chandeliers. I am always baffled by how so many rich people choose to live extravagantly rather than use their wealth to elevate the poor in their communities… 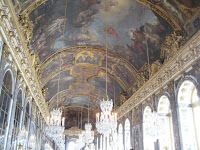 Pat also seemed to be disgusted by the palace: while we were in the excessive building, he had to run as quickly as possible to the nearest washroom to throw up. Although he likely either got food poisoning or caught the flu, he joked that he was nauseated by the “opulence of Versailles”.

Despite its flaws, I won’t deny, that Paris has a certain magnetism that captivates visitors. The charm of its narrow streets, patisseries, cafes, and fashionable shops combined with the “I can’t believe I am actually in Paris” rush does give the city a magical feeling. Whether or not it actually is a romantic place, Paris is travel destination for people who want to experience romance. From a North American perspective, travelers can enjoy activities very similar to options back home: they can dine out at fancy restaurants, go to the theatre, walk along the river, and go to museums and art galleries. Although many of the sights are embedded in history and considered to be world-class, the activities themselves are essentially the same as those offered by any major city. However, I do not know that many men back home who would actually enjoy a night out to the opera or a trip to an art gallery, but somehow they will do it in Paris. At home, these are outings that men get strung along to by their wives or girlfriends- not experiences that most would actively select. Thus, I present one hypothesis on why Paris has been deemed as romantic: it enables non-Parisian women to experience an idealized version of their husbands: artsy, cultured, attentive, and sociable. 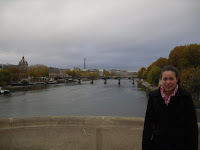 Even though my perceptions of Paris were not romantic, it was amazing to have had the opportunity to experience a city so alive with culture and history. I particularly loved the excuse to sample as much cheese, baguettes, and pastries as possible! Also, it was refreshing to realize that cities are not the cause of romance, that people create romance. Therefore, romance can be experienced anywhere in the world, not just in Paris!
Posted by Shannon Mullen at 12:09 AM

Hi Shannon!! Just found your blog and i love the idea. Need to try to catch up on your adventures! I saw some facebook pics with you and Pat, but it is so interesting to read the stories behind them.

I've never been to paris, and for a while never really understood the romantic appeal - the fancy restaurants, the opera, the touristy attractions... it seemed so over-priced and pretentious.

But one of my coworkers changed this image for me. He is now in his 60s, and goes to paris every year with his wife, and was doing so for years. He is basicly an honorary local now. So I saw some of his pictures, and listened to his stories, and paris really sounds lovely to me now - if you do what locals do and avoid the touristy craze. I especially liked the story of how he and his wife pack an inexpensive but delicious french pastry lunch from the local bakeries, and have a romantic picnic at Pont des Arts. I've seen pictures and i was amazed at how many couples and groups of friends are gathered there for similar picnics and strolls. It is just full of people, even at night! We just do not do that in Canada. :)

Thank you so much for this post! My first trip to Europe was to France. I like some parts of the country, but was not blown away. When I returned to Canada, people thought I was a freak ...even my Parisian friend.

I'm glad that some else admits it's a matter of personal preference. ;)